The Equal Love campaign – www.equalove.org.uk – seeks to end sexual orientation discrimination in both civil marriage and civil partnership law. It is supported by the Peter Tatchell Human Rights Fund.

“The bans on same-sex civil marriages and opposite-sex civil partnerships are a form of sexual apartheid – one law for gay couples and another law for heterosexual partners. Two wrongs don’t make a right. In a democratic society, we should all be equal before the law,” he said.

The legal application was simultaneously posted and faxed today to the European Court in Strasbourg. Peter Tatchell and Professor Robert Wintemute posted the application in the letter box at the corner of Abingdon Street and Great College Street, SW1, diagonally opposite the House of Commons.

The filing of the legal application to the European Court of Human Rights was announced this morning at an Equal Love briefing in Committee Room 17 of the House of Commons.

Photos of the posting and the House of Commons briefing are available here: 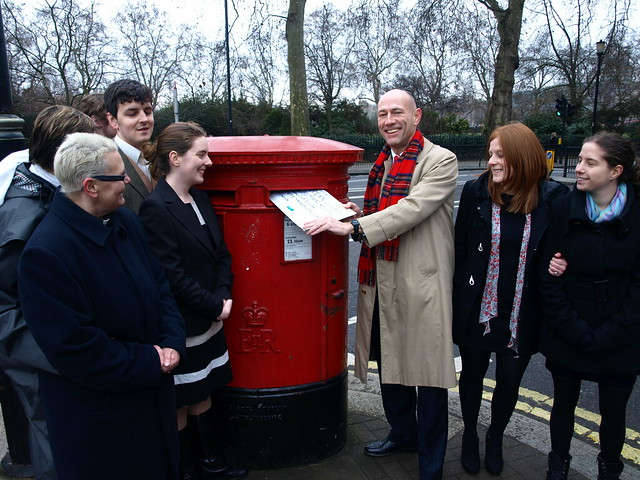 These photos are free to use, without charge, but please credit Chris Houston

This morning’s House of Commons briefing was chaired by Peter Tatchell and hosted by Green MP Caroline Lucas. She said:

“Some fairly well known singer-songwriters once said that ‘all you need is love’. But sadly it’s not as simple as that if you’re an opposite-sex couple wanting a civil partnership, or a same- sex couple wanting a civil marriage. This is a campaign about equal love – it is not about asking for special treatment for gay couples or straight couples. It is about everyone enjoying the same rights regardless of their sexuality.”

The legal advisor to the eight couples and author of the legal application, Professor Robert Wintemute of the School of Law at Kings College London, outlined the legal basis of the Equal Love challenge to the current proscriptions:

“Our Equal Love campaign wants both marriages and civil partnerships opened up to all couples, different-sex and same-sex. Let everyone have a free and equal choice,” said Professor Wintemute.

“It’s discriminatory and obnoxious, like having separate drinking fountains or beaches for different racial groups, even though the water is the same. The only function of the twin bans is to mark lesbian and gay people as socially and legally inferior to heterosexual people.

“I am confident that we have a good chance of persuading the European Court of Human Rights that the UK’s system of segregating couples into two ‘separate but equal’ legal institutions violates the European Convention. I predict that same-sex couples will be granted access to marriage in the UK and that this will be because the UK Government will eventually accept that it cannot defend the current discriminatory system,” he said.

This entry was posted in Press Release. Bookmark the permalink.